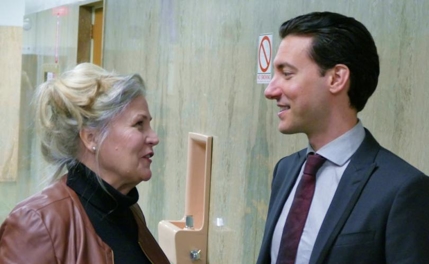 At the beginning of September 2019, Nic Cocis, a Murrieta, CA, criminal defense attorney and Liberty Counsel went to court in San Francisco to defend pro-life hero Sandra Merritt in a crucial two-week preliminary hearing. (Click here to view our Closing Argument that was filed with the court.)

It began with a retired late-term abortionist describing the unborn baby as a "tough little object" in an undercover video shown in court.

The abortionist, referred to in court as "Doe 3," also admitted in the video recorded at the 2014 National Abortion Federation abortion trade show that she routinely "didged," or killed the baby in utero with digoxin.

She did so, she said, because that gave her and the mother more "peace of mind." It also prevented the "delivery of a live fetus," which is "the biggest disaster and it never goes away."

This case stems from Sandra's courageous undercover work as an investigative journalist. With colleague David Daleiden, Sandra exposed Planned Parenthood's barbaric practice of harvesting organs from babies and selling them for profit. The videos she helped to produce stirred the conscience of America.

But in a sickening twist, Sandra is literally fighting for her freedom against 15 baseless and politically motivated felony charges.

California Attorney General Xavier Becerra—who has pocketed thousands in campaign donations from Planned Parenthood—is using the vast resources of his office to punish Merritt for her undercover work exposing his benefactor!

If convicted, Sandra could spend more than a decade behind bars.

The preliminary hearing—a pre-trial hearing to determine if the state has adequate evidence to go to trial—put witnesses under oath and under cross-examination.

"This preliminary stage is the put-up-or-shut-up stage," Nic Cocis said in court yesterday. "What today has revealed is the prosecution by the attorney general is political in nature and built on a house of cards."

Let me give you one example of what he meant.

AG Becerra filed criminal charges against Sandra for, allegedly, violating the California Invasion of Privacy Act (Penal Code 632) by using a hidden camera to record conversations. But the Act excludes recording in public places—like a hotel ballroom—where there's no expectation of privacy.

In court, an undercover video was played that features "Doe 7"—a non-physician who performed surgical abortions for Planned Parenthood. In the video, "Doe 7" speaks with Merritt’s colleague, David Daleiden, in the ballroom of San Francisco’s Westin St. Francis hotel.

The video shows people walking by, well within earshot. Under cross-examination, "Doe 7" admitted that others could overhear the conversation.

"Did you lower your voice?" Liberty Counsel Chief Litigation Counsel Horatio Mihet, asked. "Did you take any precautions to make sure these individuals didn't hear you?" "Doe 7" answered that she had not.

"Doe 7," an abortionist, also testified that she provided human organs from the babies she killed at Planned Parenthood on a regular basis.

But it's Sandra—not Planned Parenthood or its staff—who is facing criminal charges in California.

It's Sandra who's facing jail time.

It's Sandra coming under attack from an extremely aggressive activist attorney general.

It's Sandra who's facing bullying and intimidation from Planned Parenthood's legal army.

We are seeking justice for our client.

This is a selective, highly discriminatory, and politically motivated prosecution. Nic Cocis and Liberty Counsel have shown that no other citizen journalist or journalism organization has ever been charged by the state of California with a crime for undercover recordings made in the public interest.

When law enforcement selectively targets people, everyone should be concerned.

The battle will only escalate in the weeks ahead. That's because Planned Parenthood's civil lawsuit is set to begin on October 2. It will last four-six weeks.